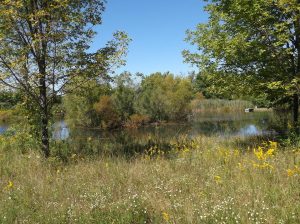 A rough foot trail to the pond exists but access improvement may be available in 2017. Battles Road is currently closed, and held for preservation purposes only.

CLOSED.  UNDER PRESERVATION ONLY STATUS

A rough foot trail to the pond exists but access improvement may be available in 2016.

Undeveloped at this time, no restrooms.

The Grand Lakes Preserve Metropark is 60 acres of undeveloped land located south of Dorset, Ohio and is the home of two large lakes; Queen Lake and Prince Lake, the lakes are located near Mells Road, east of SR 193 and are surrounded by 240 acres of undeveloped open land, forest and wetlands.

The Metroparks would like to eventually offer primitive camping.

This allotment was formed by a developer who planned out the development and filed a plat of lots with the county, sold lots, but never developed the area. It still sits as vacant land without any streets or signs.

From the oral history stand point, the allotment was surveyed, shown on paper, and sold to many out of town people in the Cleveland area.  The only thing is that the lots by themselves were not buildable so nothing was done.  Back in the 1960’s, then Ashtabula County Treasurer, Howard Fortney, developed a plan for those people who owned unbuildable lots and wanted to get out from under back taxes on the property to pay their back taxes and donate their property to the Metroparks, then write off the tax payment on their own taxes.

Since then many people have donated their properties to the Metroparks with the stipulation that the taxes are current. It was the hope of the Board Members to one day open up a park for fishing and picnicking along the two lakes owned by the Metroparks. Possibly for camping also.

In the mid-2000’s one of the lake’s dams broke and was not repaired due to lack of funds. This lake is now a low level swamp. Many lots are still privately owned although they are not buildable lots nor did the developer ever put in the “paper streets” that are shown on the plat.Google Map Driving Directions

Grand Lakes is located near 4068 Mells Road in Dorset. From RT 11 south to RT 167 East. Turn south (right) at RT 193. Turn left on Mells road approximately 1.7 miles.  Lakes are on both north and south side of road. 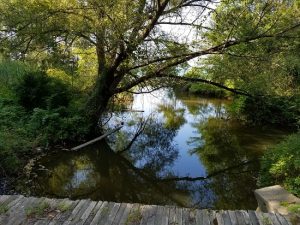 602 acres on Thompson Road and Lake Rd in Conneaut, Ohio. This largely inaccessible by Ohio road protected property forms the easternmost section of Lake Erie shoreline. Turkey Creek is now a Metroparks preserve with 225 acres of wooded wetlands, rare species of plants and wildlife with 3 miles of Turkey Creek, an outstanding trout fishing stream. To access: from Pennsylvania Lakeview Rd, park in PA, walk in.  Public access road and Lake Erie Overlook in Ohio are in the planning stages. Primitive land and old wildlife trails.

602 acres of wooded wetlands, rare species of plants and wildlife with 3 miles of Turkey Creek, an outstanding trout fishing stream. 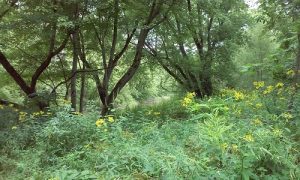 This former youth and religious camp will be transformed into a wildlife and river sanctuary in a bend in the Grand River between the Morgan Swamp Preserve and Harpersfield Covered Bridge Metropark. This conservation easement protected park encompasses 3/4 mile of Grand River frontage, soaring forests, wetlands, unusual wildflowers and wildlife habitat that will be replete with shelters and meeting space, boat launch, and future trails.

Metroparks sponsored special events only,  closed to the public while under development. Dawn to dusk

Soaring forests, wetlands, unusual wildflowers and wildlife habitat that will be replete with picnic shelters and meeting space, boat launch, and future trails.

Former youth group and religious camp.  Once a Cleveland Camp Fire Girls Camp in the 1950’s.