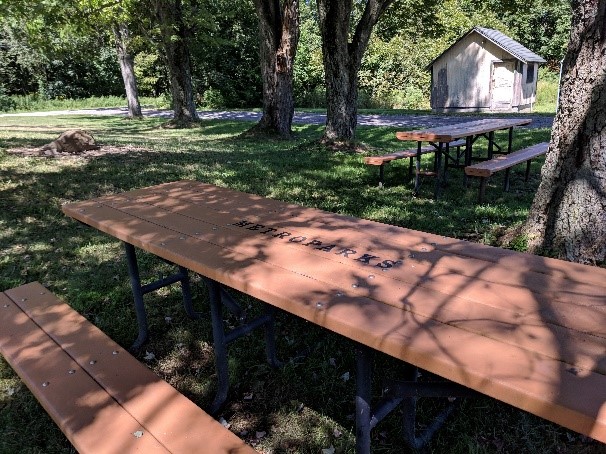 The pleasant weather recently provided me with the opportunity to take advantage of the new picnic tables at the Eyring Wetlands.  A relaxing lunch under the maples was punctuated with some flying friends in the form of butterflies and a not so welcome flying pest, a fly.  Which made me wonder about role of insects in the wetlands and woodlands of this Metropark.

Some of the most identifiable insects you can expect to see on your wetland walk at Eyring are dragonflies/damselflies, butterflies and bumblebees.  Of course, these are some of the more attractive and agreeable insects.  The wetlands and wooded areas of Eyring Wetlands Metropark are home to thousands of insect species. These include some insects for which we as humans are prey, making them less than desirable to us, but still important to the wetland ecosystem.  These include the mosquito, deer fly and other flies and gnats.

Dragonfly.  Flying insects tend to be just plain annoying. Mosquitoes bite you, leaving itchy red welts. Bees and wasps sting. Flies are just disgusting. But there’s something magical about dragonflies. Arriving on the scene around 300 million years ago, dragonflies are one of the first insects to inhabit this planet. Modern dragonflies have wingspans of only two to five inches, but fossil dragonflies from the Paleozoic era, when high oxygen levels existed, have been found with wingspans of up to two feet.

These insects, which number more than 5,000 known species (including damselflies), have had a long time to perfect the art of flying and hunting. In their larval stage, which can last up to two years, dragonflies are aquatic and eat just about anything—tadpoles, mosquitoes, fish, other insect larvae and even each other. At the end of its larval stage, the dragonfly crawls out of the water, then its exoskeleton cracks open and releases the insect’s abdomen, which had been packed in like a telescope. Its four wings come out, and they dry and harden over the next several hours to days.

Dragonflies are flat out terrifying if you’re a gnat, mosquito or other small bug. Dragonflies are expert fliers. They can fly straight up and down, hover like a helicopter and even mate mid-air.  They don’t simply chase down their prey. Instead, they snag them from the air with calculated aerial ambushes. Dragonflies can judge the speed and trajectory of a prey target and adjust their flight to intercept prey. Dragonflies catch their insect prey by grabbing it with their feet. They’re so efficient in their hunting that, in one Harvard University study, the dragonflies caught 90 to 95 percent of the prey released into their enclosure.

Bumblebees. The Bumblebee is a widely distributed social insect known for its ability to collect nectar from flowers and pollinate plants. Some differences from their non-native relative, the honey bee, is that Bumblebees live in smaller groups and do not tend to swarm. Bumblebees do not store food (honey) to survive the winter. The little food they do store is saved to feed the larvae and the egg-producing queen, or is used to survive cold, windy and rainy days. Just like social wasps, the bumblebee colony will die off at the end of summer. The new queens will then find somewhere to hibernate during the winter, usually underground and emerge to find new nesting ground ready to start a new colony in spring. Bumblebees will not die if they use their stinger, whereas honey bees will.

Bumblebees are large, yellow and black flying insects with a distinct buzz. There is variation in coloration among bumblebees and some species have bands of red, yellow and black. They have stocky bodies that are covered with many hairs to which pollen adheres. Bumblebees have four wings, the two rear wings are small and usually attached to the fore wings by a row of hooks. The wings move rapidly, at 130-240 beats per second.  The bumblebee’s commercial value and value in the wetlands is as a pollinator.

Mosquitoes. Mosquitoes don’t have too many admirers. Their bites are itchy, they spread disease, and their numbers swell rapidly. Mosquitoes have been on this planet for around one hundred million years. There are more than 3,500 different species of mosquito. They are one of the planet’s biggest success stories. Where humans, are concerned, mosquitoes are best known for their ability to bite and spread disease. Mosquito larvae are very important in aquatic ecology. Many other insects and small fish feed on them and the loss of that food source would cause their numbers to decline as well. Anything that feeds on them, such as game fish, raptorial birds, etc. would in turn suffer too.

The word “mosquito” is Spanish for “little fly”. Mosquitoes have a slender, segmented body, a pair of wings, three pairs of long hair-like legs, feathery antennae, and elongated mouthparts Mosquitoes first appeared about 226 million years ago. The life cycle consists of the egg, larva, pupa, and adult. Eggs are laid on the water surface; they hatch into motile larvae which feed on aquatic algae and organic material. The female of most species has tube-like mouthparts (called a proboscis) which can pierce the skin of a host and imbibe blood, which contains protein and iron needed to produce eggs. Thousands of mosquito species feed on the blood of various hosts ⁠— vertebrates, including mammals, birds, reptiles, amphibians, and some fish; and some invertebrates, primarily other arthropods. This loss of blood is seldom of any importance to the host. The saliva of the mosquito transmitted to the host with the bite can cause itching and a rash. In addition, many species of mosquitoes inject or ingest disease-causing organisms with the bite and are thus vectors of diseases.

Deerflies.  Deer flies are bloodsucking insects considered pests to humans and cattle. They are large flies with large brightly-coloured compound eyes, and large clear wings with dark bands. They are larger than the common housefly and smaller than the horse-fly. If you plan to avoid them at this time of year, apparently you will need to travel to Iceland, Greenland, or Hawaii since otherwise their distribution is worldwide.

Deer flies lay between 100 to 800 eggs in batches on vegetation near water or dampness. During the larval stage, which lasts one to three years, they feed on small creatures or rotting organic matter near or in the water. After a pupal stage, they emerge as adults in late spring and summer. While male deer flies collect pollen, female deer flies feed on mammal blood, which they require to produce eggs. They are attracted to prey by sight, smell, or the detection of carbon dioxide. Other attractants are body heat, movement, dark colours, and lights in the night. They are active under direct sunshine and their bite can be very painful. Anti-coagulants in the saliva of the fly prevents blood from clotting and may cause severe allergic reactions.  And like the mosquito, they can transmit disease-causing organisms. Predators of the deer fly include nest-building wasps and hornets, dragonflies, and some birds including the killdeer.

On the day that I visited the Eyring Wetland Park, I only encountered that one pesky fly.  There was a nice breeze that seemed to keep away any mosquitoes or deer flies.  But I did see many dragonflies skimming across the waters and the bumble bees were busily feeding on the blossoms of the Jewelweed and clovers. I also saw several Great Blue Herons up close and flushed a pair of mallards.  Though I only saw flashes of the smaller birds in the underbrush and tree canopy, I am sure there were some birds feasting on the many insects of the wetlands.