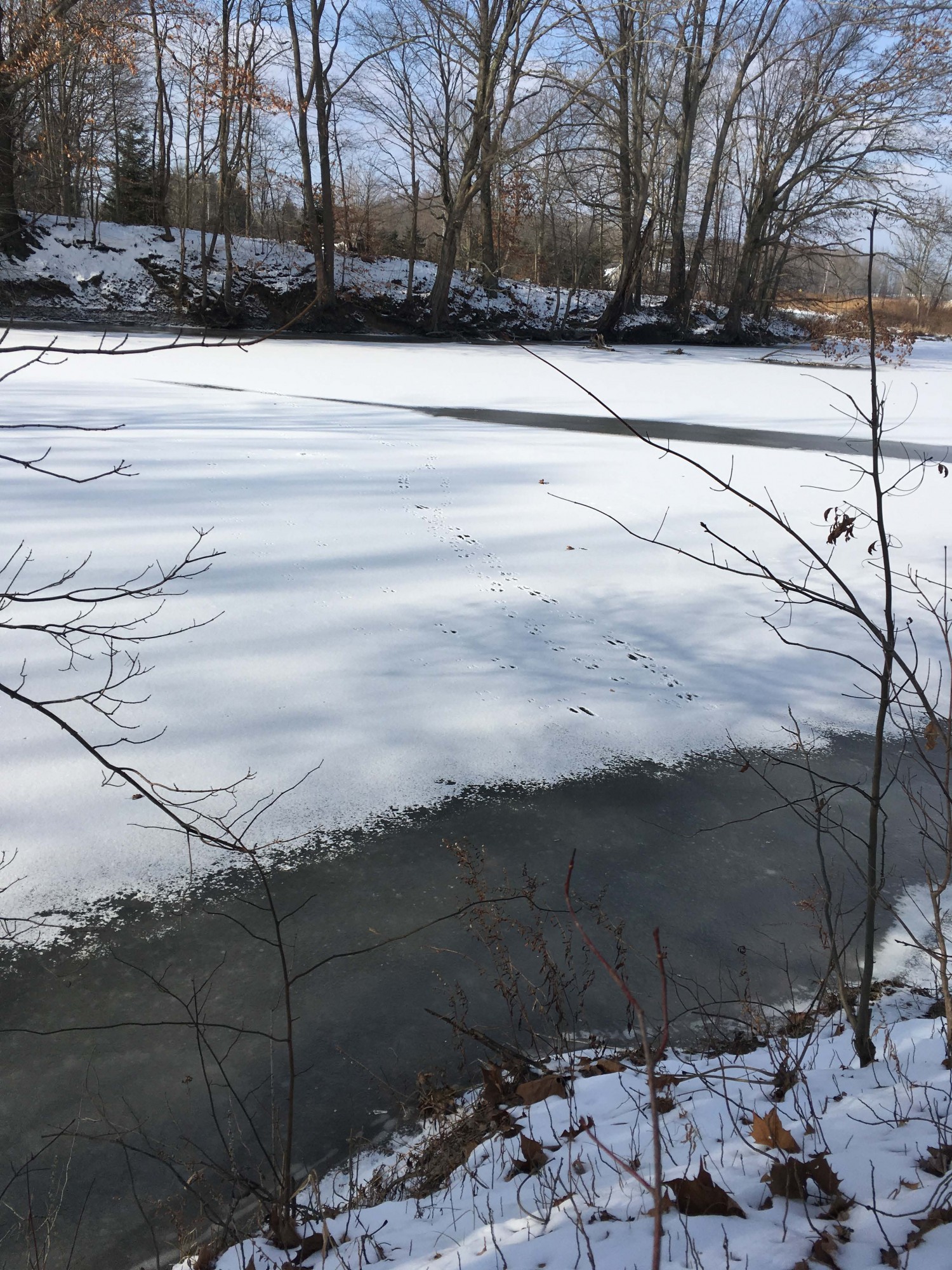 Today was a glorious morning! I had the privilege of hiking the Lampson Reservoir Trail with our CEO, Larry Frimerman and our Operations Manager, Brett Bellas. Our goal was to ensure that our trail was navigable, well-marked, and ready for our guest Naturalist, Judy Semroc, from the Cleveland Museum of Natural History next month!

Judy will be leading a winter nature walk here on Sunday, February 17 at 2 pm. Her reputation precedes her, as I’ve heard that she can even make a stroll across a parking lot interesting!

On this excursion she plans to explore nature in

winter in Ashtabula County. We will look for tracks, signs, homes, hiding places, unusual ice formations, and much more while walking the trails at Lampson Reservoir Metropark.

This morning’s temperature was 23°, and all trails were snow-covered. Mill Creek was still flowing swiftly at the waterfall, however the dammed area above the creek seemed to be pretty well frozen, as evidenced by two sets of parallel deer tracks across the snow-covered ice. The low lying wet areas, where the reservoir overflows its banks, were also frozen solid. Most of the smaller tributaries along the trail still had water flowing. Thank goodness for the many bridges and boardwalks constructed this past summer by the Ashtabula County Metroparks staff and volunteers!

There were very few visible birds this morning. Larry spotted a Black Capped Chickadee, Brett spotted an American Bald Eagle, and I caught a glimpse of a White Breasted Nuthatch and a second Chickadee. The only waterfowl that were visible were a few dozen Canada Geese across the street in an open pond. I am always thankful when there is open water for the birds to drink in the winter.

Yes, they can eat snow when absolutely necessary, but it really stresses them on cold winter days, lowers their body temperature and makes them even more vulnerable to predators in their weakened condition.

We observed a number of tracks along the way: baby raccoons, small and large deer, mice, squirrels, fox  and either a really big dog or another very large footed creature!

It is important to ensure that no one gets lost on the trail. At one point there is an 8/10 of a mile loop that takes you back to the same location. The trail is difficult to see at times in the white of the snow.  We set out to rectify this situation this morning.

We also wanted to avoid confusion with other colored tags and ribbons.

The second reason for wanting to remove the old tags, was that some of them had been on the trees since before Lampson Reservoir became a Metropark. Some of the trees were experiencing the beginnings of girdling, where the tie becomes tighter as the tree grows and it essentially cuts off the tree’s ability to pass nutrients across the constricted area. Sadly, this can lead to the death of the tree. Girdling is sometimes used in the horticulture industry to intentionally kill a tree, thereby making it easier to cut it down later, or eliminating the need to cut it down altogether. This can also be accomplished by peeling off the bark in a complete  360° circumference around the tree. However, I am quite certain that that was not the intention of the previously placed flags. We used over 250 feet of fluorescent orange tape today and hopefully that will make future hikes for everyone more enjoyable!

Happy meanderings! Hope to see you on February 17!

P.S. Dress warm, in layers, along with gloves, scarf, hat and waterproof boots!