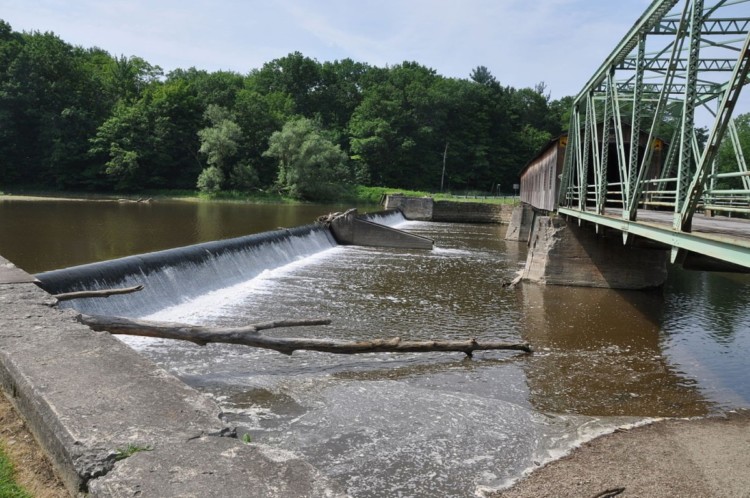 Metropark officials expected revenues total a little more than $903,000
By JUSTIN DENNIS jdennis@starbeacon.com Nov 14, 2016
JEFFERSON — With a new executive director and a preliminary budget OK’d by the county budget commission, Ashtabula County Metroparks officials updated the Star Beacon on the myriad projects getting underway.
Executive Director Larry Frimerman, who joined the board in August, said he’s met with the board seven out of eight weeks in the previous two months, to learn about the area’s Metroparks, their features and operations, and existing update plans.
Wednesday’s meeting at the board’s new North Chestnut Street office was hours long, he said.
Frimerman’s contract costs $65,000 in his first year, and is renegotiated every year, he said. The former 13-year federal liaison for the Ohio Consumers’ Counsel mused, “I don’t like spending the public’s money.”
“It’s so important to figure out a way of spending it wisely and stretching those dollars as far as you can,” he said.
The board is now working with about $852,000 in new 2014 levy funding it began receiving this year in semi-annual installments of about $426,000. With outside funding sources, its expected revenues total a little more than $903,000 on the year, he said.
He said the board has reformed its advisory council — which takes its cues from the community — and it meets for the first time this week.
The board set aside up to $90,000 in its operating budget to pay for police coverage at the parks and greenway trails, during “the peak times for park use and potential park safety issues,” Frimerman said.
The board has also requested a contract with the county Sheriff’s Department, to have deputies stationed part-time at different parts of the park throughout the week, he said.

Harpersfield Metropark, Harpersfield Twp, Geneva
Frimerman said the board also plans to be involved in replacement of the more than 100-year-old Harpersfield Dam, which the Star Beacon reported is expected to cost about $6 million.
He said the dam acts as a barrier against an infestation of sea lampreys, which prey on sport fish.
The board also recently added handicapped accessible picnic tables, swings and other amenities at the park, as part of a $25,000 NatureWorks grant from the state Department of Natural Resources, Frimerman said.
North Shore Trail – West Avenue, Ashtabula
Finishing the trail — which would expand the Western Reserve Greenway Trail’s span by about four miles from West Avenue to the Harbor — was expected to cost about $2.2 million, board members said in May.
But acquisition deals with commercial property owners in the proposed area which fell through mean the trail plan will now likely include municipal roadways, Frimerman said. That will, however, save some money, he added.
“We still have to get an agreement signed with the city of Ashtabula in terms of ‘who does what,’” he said. “If we build it and they come, who will maintain?”
The board’s grant availability period for easements and rights-of-way runs through December. The board is still seeking design and implementation approval from the state transportation department.
Lampson Reservoir Metropark, Jefferson
Although officials were initially eyeing the reservoir’s deteriorating dam for removal due to safety concerns — one drowning was reported in 2010 — Frimerman said the board recognizes its removal could have consequent benefits for local flora and fauna.
“It’s not just impeding water flow and making it a little less desirable and healthy as a stream for fish and other plants and animals … also, it’s a dam safety issue,” he said.
He said money for the job could be tied into flood plain restoration funding for 70 acres adjacent to the reservoir, which were lumped with the park when the Western Reserve Land Conservancy bought the property from the county.
“Not only will there be restored wetlands and habitats, but there’ll be new hiking trails and access points and opportunities for fishermen and wildlife enthusiasts and birders and whatnot — and it will all occur within the next few years,” Frimerman said.
Camp Peet, Creek Road, Conneaut (Clara D Peet Preserve)
Frimerman said the board is planning a vault toilet for the park, and is designing a pavilion to allow for more activities.
Since the Harpersfield Metropark now has new picnic tables, some of its existing tables that are in better shape could be moved to Camp Peet.
The board assumed ownership of the about 70-acre park property last year. Last month, the park’s roughly two miles of trails and primitive campsites were opened from dawn to dusk for pedestrians, and youth groups.
“Now that Camp Peet is open, we have to make sure it’s policed and clean,” he said. “I think people are very happy there, from everything we’ve seen.”
Hatches Corners, Metropark, State Route 7, Monroe Township
The board is currently designing horse and hiking trails at the about 200-acre park. Frimerman said the addition would likely start as an inexpensive, “primitive” trail, which could be improved later on.
A parking lot on the Route 7 side of the park is already in place, and Frimerman said there’s potential for another lot on the Hatches Corners side.
He said the board may be able to bring on an intern to identify plant species along the park’s trails and put together a guidebook for visitors. Frimerman said the board looks to make informational brochures on plant species and designated trails, as well as directional signage, available for each of its parks.
More details
He said the Metroparks board will soon receive a new Conneaut property before the end of the year, which will be acquired for them through an outside agency. The board intends to turn it into a nature preserve, which would be light on cost, he said. He declined to give further details on the property before the deal is finalized.
The board has also awarded two bids for daytime snow plowing at the Greenway Trail in Austinburg, Eagleville, Orwell and Lampson Road, when snowfall is five inches or more, Frimerman said.
The board also is finishing installing the parking lot at the Blakeslee (Friends of Conneaut Creek Metropark) Park and has begun planning new trail routes.