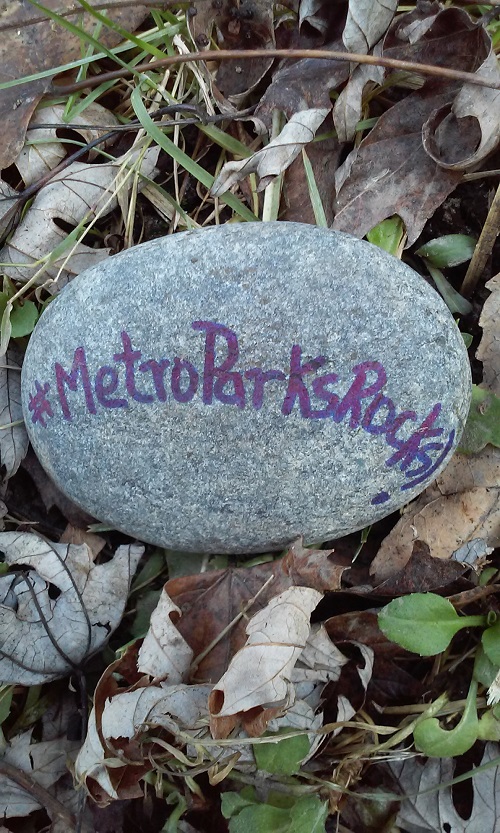 Ashtabula County Metroparks and ACDL set to Rock this summer

JEFFERSON—Ashtabula County Metroparks and the Ashtabula County District Library (ACDL) are partners in a summer 2018 project that will make park visitation fun, and possibly profitable, for individuals and families.

#MetroParksRocks! and #ACDLRocks! are the social media hashtags for the Rocks! collaborative developed by Lyn Glover, ACDL Circulation Coordinator, and the volunteer programming committee of Metroparks.

“Metroparks was looking at ways to increase traffic in the parks this summer,” said Larry Frimerman, Metroparks Executive Director. “One of the ways we are doing this is by offering a slate of events and programs, which are described in our online program guide (accessible at ashtabulametroparks.com and https://indd.adobe.com/view/5430a3d5-1c0d-4a55-be1b-2a3638a11633). But we also wanted to encourage independent exploration of the parks and their miles of trails.”

“I founded “#AshtabulaRocks!” with my friend Amy Bevilacqua in the spring of 2016, as a way to promote positive messages throughout Ashtabula County,” Glover says. “I love anything to do with art. I also have a degree in environmental biology, so when Ashtabula County Metroparks approached ACDL to implement the new #MetroParksRocks!/#ACDLRocks! cooperative project, I was a perfect fit to spearhead the effort of ACDL.”

ACDL this year streamlined new Art Lab programs for adults and children that are free and open to the public. Several of the labs have been dedicated to painting the special rocks, which will be placed in designated Metroparks. Nature themes dominate.

“It’s so exciting to see patrons explore their creativity,” Glover said. “The (Rocks) project is one of many fun programs being held at the library this summer. We want to have programs that appeal to all of our patrons, whether they are 2 or 92.”

Dozens of rocks have been painted for the project, and Glover says the painting will continue through early May to ensure a good supply of the artsy rocks.

“Additionally, we’ll have a rock painting table at the Longest Day of Play on June 23, at Lake Shore Park,” Glover says.

Carl E. Feather, who started the Photographers in the Parks group in 2017, suggested that the photographers place a rock wherever they find something interesting or beautiful to photograph. Most days during the contest period, May 1 to Sept. 30, 2018, one of their photos will be posted on the Facebook pages of the ACDL and Metroparks.

“We really want people to get into the parks and use their powers of observation to make connections to the landscape, flora and inspiring features of the environment,” Frimerman said. “This approach also helps the participant understand how a photographer ‘sees’ a scene differently from a casual visitor.”

Participating parks are: Harpersfield Covered Bridge (both sides), Western Reserve Greenway Trail (entire length), Camp Peet, Eyring Wetlands, Hatches Corners, Lampson Reservoir, Blakeslee/Friends of Conneaut Creek (no rocks will be placed in the pollinator garden!). All rocks must be placed on the trail.

And what happens when a rock is located? Ideally, it is not to be taken as a souvenir of the visit. Rather, the person or family who finds a rock is to take a selfie photo of themselves with it and post that picture to their social media sites with the hashtags #MetroParksRocks! and #ACDLRocks!  Share information about your visit to the park, what you found interesting and how your family used it as an outing.

Once the picture is posted, the finder must send an email to info@ashtabulametroparks.com with “Rocks” in the subject line to be entered in the contest. The email should include the finder’s name, the number of the rock (printed on the unique ID tag on the back) and park where it was located. Each email entry will be entered into a drawing for prizes at the end of the season.

Glover said that a bonus entry can be earned if the person finding the rock takes their cellphone or tablet to either the ACDL in Ashtabula or the Geneva branch and shows the post to a library assistant at the circulation desk.

“It is important that they include the hashtags in their initial post because they will be used to verify that winners followed the proper procedure when their names are drawn at the end of the contest,” Glover said.

Persons who find a rock and document the find online, have the fun of placing the rock in a new Metroparks location, either within the same park or another participating Ashtabula County Metropark. They are encouraged to post their own “clue picture” on social media.

“We’d like to see just how far these rocks can travel over the contest period,” Sheryle Kvitko, chair of the Programming Committee said. “Of course, what we really want is have park users visit new locations throughout the contest period and discover all the Metroparks have to offer.”

To ensure a fair competition, entries from anyone initially placing the rocks (eg. Photographers in the Parks members) or ACDL or Metroparks staff members will be excluded from the drawing.