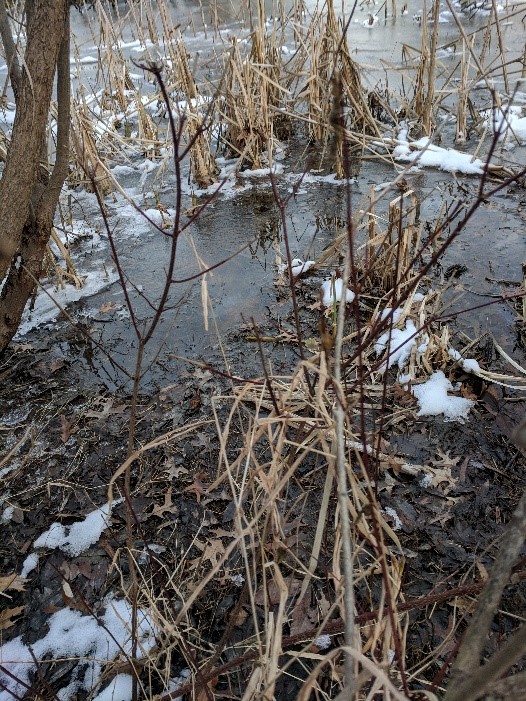 With the cold and snow of the new year discouraging even the hardiest from venturing outside, let’s take a moment to discuss why wetlands are so important.  Throughout history wetlands have provided materials for food, fiber and shelter that support civilization.  This is evidence by the enormous wetland complex area of the Tigris-Euphrates delta, considered the “cradle of civilization”.  Wetlands can be the most diverse and productive natural systems in the world.  Unfortunately, as human cultures grew from reliance on natural subsistence to an agricultural society, wetlands were often viewed as wastelands. But with the increase in water pollution, flooding of cities and towns, the decline of fish and wildlife species, people began to gain appreciation of the values of natural wetlands.   Here in the United States public and scientific recognition of the importance of wetlands in the 1950s and 1960s, resulted in the 1972 Federal Clean Water Act.  Though not a wetlands protection law, this action resulted in the acceleration of scientific study and a better understanding of the function, identification, and delineation of wetlands.  Since that time, indicators used to identify wetlands have moved from identifying water and associated plant communities to an approach that considers a combination of factors that include vegetation, soils and signs of hydrology.

So, what is a wetland?  For regulatory purposes in the United States, under the Clean Water Act, the term wetlands means “those areas that are inundated or saturated by surface or groundwater at a frequency and duration sufficient to support, and that under normal circumstances do support, a prevalence of vegetation typically adapted for life in saturated soil conditions. Wetlands generally include swamps, marshes, bogs and similar areas.”  Wetlands are therefore defined by the presence of water, and certain identifiable vegetation and soils.

Though the term wetland would seem to indicate the presence of standing water, the amount of water present in a wetland can vary greatly. Some wetlands are permanently flooded, while others are only seasonally flooded but retain saturated soils throughout much of the unflooded period. Still other wetlands may rarely flood, but saturated soil conditions still are present long enough to support wetland-adapted plants and for hydric soil characteristics to develop. Hydric soils develop when chemical changes take place in the soil due to the low-oxygen conditions associated with prolonged saturation. The soil survey for Ashtabula County lists 10 hydric soil classifications and 15 non-hydric soils with a hydric component.

Different plant communities may be found in different types of wetlands, with each species adapted to the local hydrology (the quantity, distribution, and movement of water throughout a given area). Wetland plants are often referred to as hydrophytes because they are specially adapted to grow in saturated soils. The many factors of water, soil and plants lead to a wide variety of different types of wetlands.  In the Midwest, these typically include the following:

Marshes are wetlands that are permanently flooded or flooded during high water periods at the edges of rivers, streams, lakes, or ponds. Marshes may be dominated by submersed, floating-leaved, or emergent vegetation, including cattails, pondweeds, water lilies, and various sedges, rushes, spike rushes, grasses, and forbs.

Emergent marsh is the marsh found around shorelines out to relatively shallow water, and is generally characterized by up to 100% cover with emergent plant species. In the Midwest, these species may include graminoids (grasses and grass-like plants) such as river bulrush and rice cut grass, as well as characteristic forbs such as purple false foxglove, nodding bur marigold, pickerel-weed, and duck potato. These marshes are ideal habitat for a wide range of animals, including mink, muskrat, raccoons, Great Blue Herons, and a multitude of dragonflies, butterflies, and other insects.

Hemi-marsh is found in deeper water and is characterized by an open mix of emergent and/or floating-leaved vegetation interspersed with a submersed plant community. The submersed community may consist of species like sago pondweed, coontail, and wild celery, while the emergent or floating-leaved group can include deeper water species like broad-leaved cattail, American lotus, white water lily, and common bur reed. The rich vegetation also provides an exceptional nursery for young fish and is a great production area for the zooplankton and insects that are a critical part of the food web.

Sedge meadows (or wet meadows) are wetlands with permanently or near-permanently saturated soils. They may form a transitional zone between marshes and other wetlands with less-saturated soils, or occur in wet depressions and swales or around groundwater discharge zones. The meadows are wet grasslands often dominated by sedges and grasses with relatively few forbs (broad-leaved flowering plants). Birds frequenting this habitat include the King Rail, Sandhill Crane, Northern Harrier, and Sedge Wren.

Wet prairie is an ecosystem that is the driest type of wetland in the Midwest. Wet prairies are herbaceous wetlands dominated by a mixture of graminoids and forbs such as little bluestem, northern dropseed, prairie Indian plantain, marsh phlox, and foxglove beardtongue.

Fens and seeps are wetlands that are fed by groundwater that “seeps” out to the soil’s surface. Fens are typically alkaline from groundwater emerging from calcareous or dolomitic soils or bedrock zones, and they contain a layer of peat formed from dead plant material. Seeps are typically found along the base of slopes or glacial moraines where water emerges from saturated soils or a spring.

Bogs are basin wetlands for which precipitation is the only source of water; they are typically not fed by surfacing groundwater or streams. Bogs are generally dominated by sphagnum mosses, which may form a floating mat over deeper water that supports a rich assortment of specially adapted species.

Swamps are wetlands dominated by woody vegetation that typically have standing water during at least certain times of the year. They are often found in low-elevation floodplains along rivers or slow-moving streams.

When you next get the chance to hike around Eyring Wetland Park, look for the identifying characteristics of the marshes and wet meadows that are found there.  If you want to learn more about wetlands, workshops are offered by groups throughout the State including the Ohio Wetlands Association.  Check out the events tab on the website at https://www.ohwetlands.org.  For our next wander we will discuss the benefits of our wetlands.