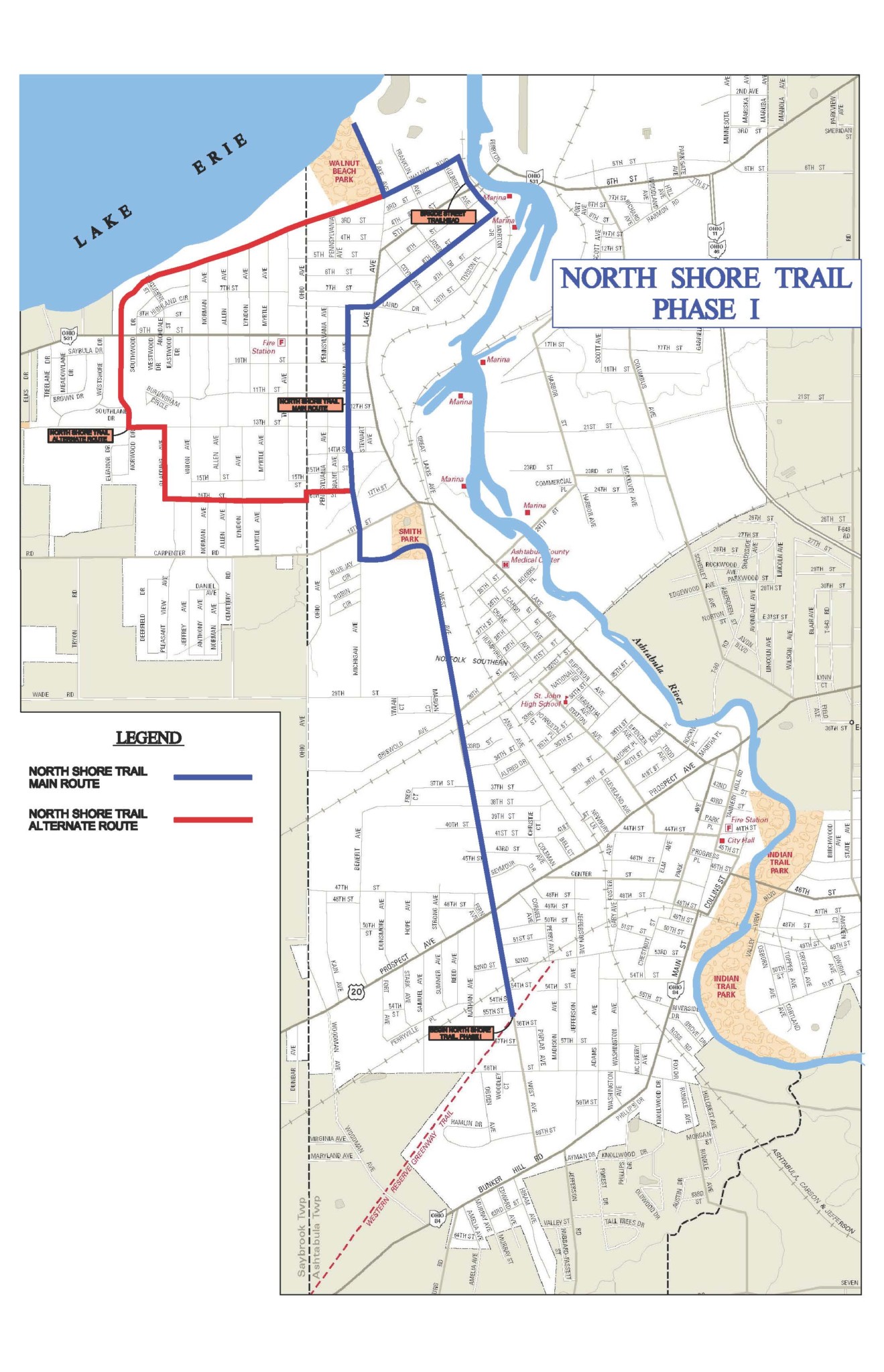 Jefferson, OH Thursday, September 7, 2017.  Ashtabula County Metroparks has been officially awarded funding to complete the North Shore Trail from the Ohio Department of Transportation, Office of Local Programs.  The ODOT grant of up to $1,161,000 has been secured through the state’s 2017 Transportation Alternatives Program for funding of bicycle/pedestrian trail construction.  The local matching share as well as design and engineering costs will be generously provided by the Ashtabula Civic Development Corporation (CDC) to complete its 2010 Placemaking grant project.  With needed due diligence to receive state funds, it is likely the project will be completed by 2019 or 2020.

The Transportation Alternatives Program (TAP) trail provides funding to complete the corridor beginning at the Morrison Station Trailhead of the Western Reserve Greenway on West Avenue in Ashtabula and descends to the Ashtabula Harbor at the Ashtabula Bascule Lift Bridge, continuing on to Walnut Beach and Lake Erie. This trail project is entirely within the city of Ashtabula and is supported by an agreement between Ashtabula County Metroparks and the City of Ashtabula.  The project extends the Ashtabula County Metroparks’ existing 27.5 mile Western Reserve Greenway which begins at the southern portion of the county line and traverses the entire county. Likewise, it extends a critical part of the proposed 110 mile Great Ohio Lake-to-River Greenway.

The trail will provide a non-motorized transportation linkage to connect students to schools, employees to employers, customers to merchants, trail users to users to the east to west Ohio Coastal Trail and Lake Erie. The entirety of the North Shore Trail is within the City Limits of the City of Ashtabula. The great majority of the 4.2 mile trail is on-road due to the urban nature of the area. The route permits tie-ins and accessibility to a high percentage of Ashtabula residents for transportation and recreational purposes. The trail will be located within 1.5 miles of nearly every portion of the city. The trail terminates at Walnut Beach Park on the shore of Lake Erie which has a public parking lot, restroom facilities, and other recreational amenities including beach access to Lake Erie.

“We are so very appreciative for ODOT’s and CDC’s support for the North Shore Trail project, as well as our partnership with the City of Ashtabula,” commented Larry Frimerman, Metroparks’ Executive Director.  “This project has been more than thirty years in the making, he added. As such, we are grateful for the support from the Ashtabula County voters, foundations such as the CDC, Robert S. Morrison, Ashtabula Foundation and other county agencies. Letters of support from the CDC, City of Ashtabula, State Senator Sean O’Brien, Representative John Patterson, the Ashtabula County Commissioners, Lift Bridge Community Association, and Ohio Rails to Trails Conservancy were also helpful and demonstrated widespread support and importance.”

Next Steps:  Ashtabula County Metroparks will be working with ODOT and partners on standard project scoping as well as issuing a Request for Qualifications this month.

Ashtabula County Metroparks is a statutory metropark agency operating under ORC Section 1545 to provide park and recreation services to Ashtabula County. It partners with and leverages funds from many governmental, nonprofit and health organizations to maximize the public’s resources For Fun, For Health and For Life throughout Ashtabula County. For more information, please visit its website at www.ashtabulametroparks.com, call the office at (440) 576-0717 and/or follow us on social media.