Sealed proposals will be received at the Ashtabula County Metroparks at 91 N. Chestnut Street, Jefferson, Ohio 44047 until 11:00 o’clock AM Local Time on     November 13, 2020    , or as may be amended by written Addenda, and will be opened and read immediately thereafter for the:

The project consists of a planting plan at the Red Brook Metropark including but not limited to trees, shrubs, perennial ground cover, and wooden seating.

Contract Documents may be examined at the following locations:

Plans, specifications, and bidding blanks may be obtained at the above office of the ENGINEER upon payment of FIFTY DOLLARS ($50.00) NON‑REFUNDABLE.  Contract Documents will be mailed as soon as possible after receipt of request and payment for such documents.  Checks shall be made payable to LJB, INC.

A bid security must be submitted with the bid.  The bid security shall be in the form of a Certified check, a Cashiers check, or an Irrevocable Letter of Credit for an amount equal to ten percent (10%) of the bid; OR a Bond for 10% of the AMOUNT of the bid.  Said bid security shall be made payable to the OWNER and is to be held as a guarantee that in the event the bid is accepted and a contract is awarded to the BIDDER, the contract will be duly executed and its performance properly secured.

The successful BIDDER will be required to furnish a Contract Performance Bond in an amount not less than one hundred percent (100%) of the total price bid for the complete work, said Bond shall be that of an approved surety company authorized to transact business in the State of Ohio and shall be underwritten by a surety that is listed on the most current Department of the Treasury Circular 570, “Surety Companies Acceptable on Federal Bonds”.

Questions by prospective bidders concerning this project should be directed to the PROJECT MANAGER, Robert Jurs, RLA, Monday through Friday between 8:00 A.M. and 3:00 P.M.  No questions will be taken during any other time.

Each bid proposal must be made upon the blanks furnished with the Contract Documents and must be delivered to Ashtabula County Metroparks at 91 N. Chestnut Street, Jefferson, Ohio 44047, prior to the time on the date stated above.

No bidder may withdraw a bid within 60 days after the actual date of the opening thereof.

Non-Discrimination in Employment – Bidders on this work will be required to comply with the President’s Executive Order No. 11246 in that employees and applicants for employment shall not discriminate against because of race, color, religion, sex or national origin.  The requirements under this order are explained in the contract documents.

The OWNER reserves the right to reject any or all bids, to waive any informalities or irregularities in the bids received, and to accept any bid which it deems most favorable.

A single person, Girette manlift by Northline Model N18 has been designated as surplus equipment by Ashtabula County Metroparks and is now up for bid by the public. Please submit sealed bids to 91 North Chestnut St. Jefferson Ohio 44047 by November 13th at 9:00Am for processing.

You can view the manlift in person next to the Austinburg Greenway Trail Trailhead at 2767 State Route 307 Austinburg Ohio 44010. 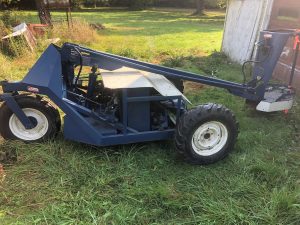 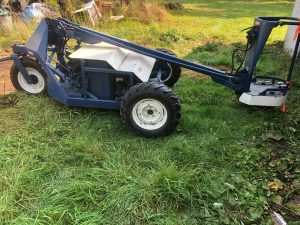