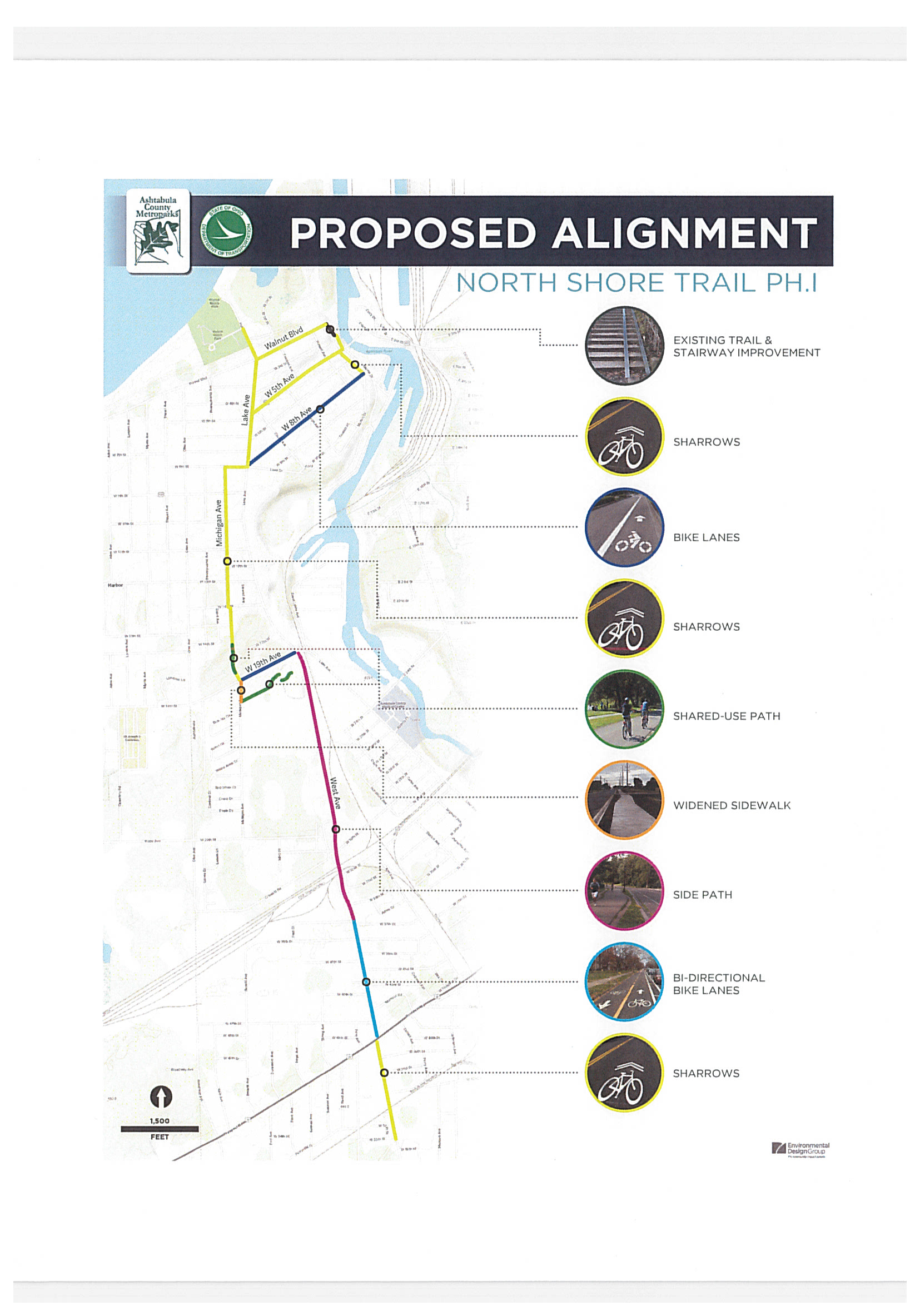 North Shore Trail May Begin in 2019

The North Shore Trail is primarily on-road, with a combination of bike lanes, widened sidewalks, share-the-road sections, a small portion off-road trail, and utilization of existing sidewalks. Metroparks and its project consultant, the Environmental Design Group provided an update, status report and opportunity for questions and comments from the nearly 50 attendees at Briquettes Grille. Maps of the route, cross-sections and roadway renderings were both presented and available for review at the forum.

Participants heard that the trail will begin at Lake Erie, wind its way through Ashtabula Harbor and the City of Ashtabula and connect to the Western Reserve Greenway’s HL Morrison Station Trailhead at West Avenue in Ashtabula.

Conversely, for those beginning at the Morrison Station Trailhead, the trail makes its way north on West Avenue to Ashtabula Parks’ Smith Field before turning westward to Michigan Avenue.  The trail then continues off road through a vacated section of Michigan Avenue, picking up the roadway at 16th St to 8th Street. From 8th Street, the route crosses Lake Avenue, then heading northeast to Goodwill Drive at Ashtabula Harbor.

The trail will continue to Bridge Street, head up the Point Park steps utilizing a bike trough, head west from Point Park and the Maritime and Transportation Museum on Walnut Boulevard to Hubbard House Underground Railroad Museum and finally to Walnut Beach and Lake Erie.

Ashtabula Metroparks’ Executive Director Larry Frimerman introduced the consultant, Ohio Department of Transportation representatives, Metroparks Board and staff, providing background of the project, thanking funders ODOT, CDC, ODNR, Robert S. Morrison Foundation, Ashtabula Foundation and others. This $1.3 Million phase of the project is funded by Ohio Department of Transportation with a Civic Development Corporation matching grant. “This project is – 30 years in the making from conception. We have so many to thank, including those of you here whom have persevered.” “This project has had multiple iterations and routes over time. This route ended up being the most practical, direct and with least resistance as well as fewest obstacles.” “You may want to think of this as Phase 1, just getting us to the Harbor and the Lake”, he continued. “Maintenance and management of the on-road and off-road portions are covered by the MOU with City of Ashtabula. The consultant and Metroparks are working closely with ODOT District 4.

“The trail will be patrolled and safeguarded by our park rangers as well as the volunteer Bike Patrol, noted Metroparks Board Vice President Marie Lane.

Michelle Johnson, Director at the Environmental Design Group, provided the presentation and rationales for different components, route and approaches. “Trails provide a transportation route, fitness opportunity and recreational amenity that complements both economic development and quality of life. The North Shore Trail will provide access for residents to and from important work and leisure destinations.  It provides an amenity for tourists as well”, Johnson observed. “The trail is being designed to meet the needs of all classes of cyclists and pedestrians, from those that are very comfortable riding on city streets to those who feel much more comfortable on off-road trails. At this point, other possible routes are not possible with the budget and project funding constraints. Federally funded off road trail projects starting from scratch are averaging $1 million/mile,” she added.

Johnson asked audience members and the general public to submit comments or contact the Environmental Design Group or Metroparks with comments and thoughts. “This portion of the process is necessary so that we can begin the design and engineering process in earnest, receive the needed permits and approvals and shortly thereafter to be able to bid out the construction contract. If we are able to keep ducks in a row, we may be able to let the bidding process late in the spring, and then begin construction as soon as late summer or fall of this year”, she added.

The North Shore Trail is considered a major link for bike trails throughout Ashtabula County, officials said. It is included in the city of Ashtabula’s and Ashtabula County’s land use plans.

Next, Metroparks is seeking funding to plan and begin the Pymatuning Valley Greenway Trail, another long-awaited project that could spur both economic development and quality of life improvements in the county.

For more information on the North Shore Trail or Ashtabula Metroparks, visit  Metroparks on Facebook, or contact the parks office at (440) 576-0717.