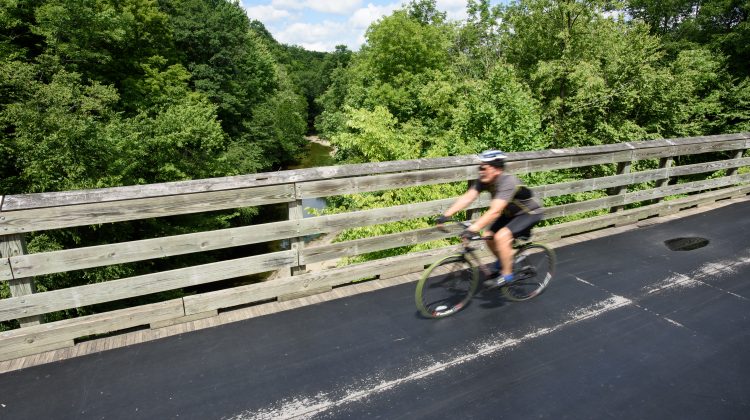 The Western Reserve Greenway is a paved rail-trail extending 50 miles through Ashtabula and Trumbull counties in northeast Ohio. Ashtabula County is home to 33 of these miles, stretching from the city of Ashtabula southward to the county line where it continues for 17 miles into Trumbull County.

Mostly rural, Ashtabula County’s portion of the trail runs along farms and through abundant wooded areas. Many users tout the beauty of the thick tree canopy providing cool shade on hot summer days.

The trail is nicely maintained by a dedicated crew of volunteers, the trail is dotted with benches, intersecting road names and mileage markers, 12 interpretive signs along the way detail the proud history of the Underground Railroad in Ashtabula County.

To enhance the experience for all users of the Greenway, volunteer bike patrol provide information, assistance, safety & trail maintenance.

The ACT2000 task force on Parks & Recreation became interested in the Western Reserve Greenway efforts several years ago. The task force was instrumental in raising further awareness of the project.

As a result, a substantial amount of “Jump Start” funding was awarded to the Ashtabula County MetroParks by the Civic Development Corporation of Ashtabula (the CDC) and the Ashtabula Foundation in 1998. Early in 1999 we were awarded a TEA-21 grant which, with matching funds, totalled nearly $1,250,000 for trail construction.

Koski Construction was awarded the paving contract in early November 2001 for the trail’s first phase of construction. The formal opening ceremony for the Western Reserve Greenway was held at noon on Monday, July 15th, 2002.

Because the trail construction is federally funded, motorized vehicles are prohibited except for motorized wheelchairs and maintenance vehicles.

However, as a result of the same law, snowmobiles will be allowed when winter conditions permit. Funding was contingent upon the trail’s being usable in all seasons of the year, and Ashtabula County is known for snow during “normal” winters. There are no other exceptions to this mandate which the County Parks Board enforces.

Partnership with the Illuminating Company (a division of First Energy) resulted in their clearing overgrowth from the Greenway between South Woodman Avenue and West Avenue in spring of 2000. Besides giving the local citizens an earlier-than-expected opportunity to use the Trail, it also benefited the City of Ashtabula by providing installation of a 35,000-volt feeder line for city residents.

Income from state road taxes was used to pave the new staging area at the Munson Hill Trailhead. The new road and parking lot, complete with collapsible bollards (i.e., barriers), were completed early in 2000, along with the staging area in Austinburg on SR 307 next to the Post Office.

Additional improvements to the trail include the parking lot on Woodman Avenue where the trail crosses at street level. The land was donated by the Herzog family, and the local Rotary Club funded the improvement. The other is a restored 1897 King Bridge installed at the Clay Street crossing. This bridge, built with steel from one of Andrew Carnegie’s steel mills, is allegedly the only one the King family knows of that has been restored and put to use this way instead of being scrapped.

A brief word of explanation: Although its formal name is “The Western Reserve Greenway,” it is also loosely referred to as the Trail, or the Greenway, or the Greenway Trail. By any name, it is a great place to walk, run, stroll, hike, bike, roller blade, and ski.

Once the Western Reserve Greenway is fully developed, it will tie into a nationwide network of hiking/biking trails.

Please contact the MetroPark board office 30 days in advance to notify us about any events your organization is planning for the trail. This advance notice will help us prevent potential conflicts with other user groups.

Rock Creek Runaround is located in the Village of Rock Creek. Take State Route 45 to the flashing light at the intersection of Main Street. Travel approximately mile east of State Route 45 to the intersections of Jefferson St. (Footville Richmond) and tum left. Make a quick right onto Liberty Street and continue around the curve on Station Street. Parking is available along Railroad Street. 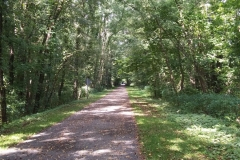 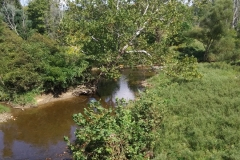 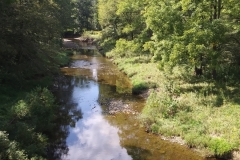 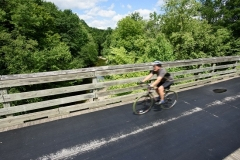 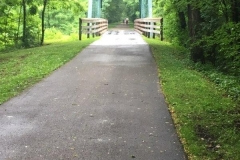 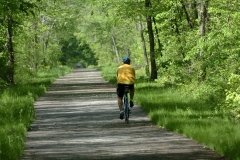