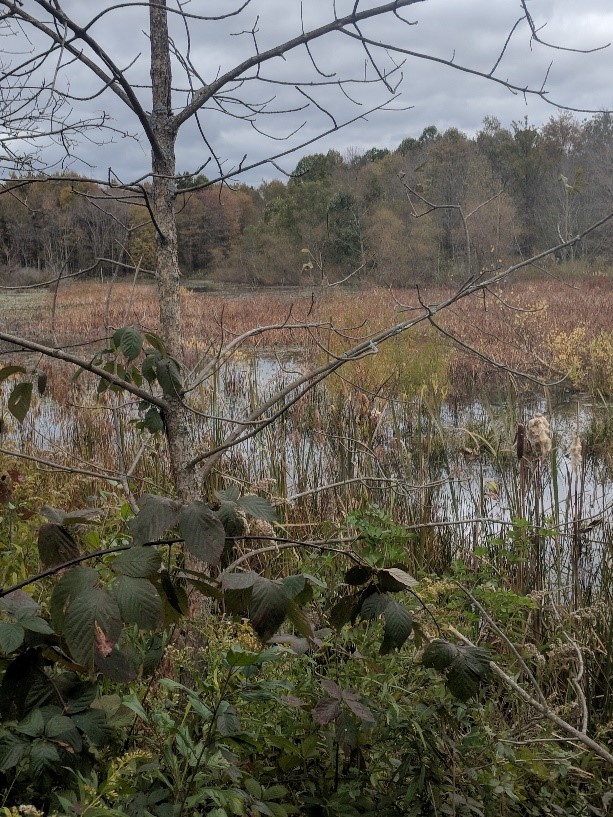 In the Eyring Wetlands Preserve Metropark

The temperatures have begun an inevitable dip.  On the day that I was able to get out and wander the wetlands, there was a high temperature of 45 degrees and the leaves were finally showing their colors. But as the cold increases, one thing that many of us look forward to is the demise of some of our most annoying insects.  So, I was surprised to learn on a nature walk with ODNR a few years ago that many insects overwinter in Ohio.  Now there are many different ways that insects can accomplish this. It can be as eggs underground or in logs, which is the cricket’s standard method.  Moths and butterflies run the gamut. They’ll winter over as eggs, larvae, pupae and adults. Which is why you might occasionally catch a glimpse of a butterfly or moth on an unusually warm December day.

Also, many Ectothermic (cold-blooded) animals use the temperature around them to regulate their body temperature. They have the ability to essentially pause their life for temperature purposes, and have chemicals that act like antifreeze in their bodies to prevent them from freezing. The process is called diapause. Insects basically shut down when it gets cold by producing a chemical compound in their bodies that acts like an antifreeze. The bugs become in effect supercooled, and that prevents any damage from the outside world when the weather turns super-cold.

So, as I was walking today, I decided to make an exploration of insect hiding places.   I looked for a slow-moving caterpillar in the leaf litter.  I uncovered a beetle scurrying over a leaf within the grass.  And I watched as a slug was getting it’s fill of what must have been a very tasty mushroom.

I was not able to spot any adult butterflies or moths sequestered beneath the loose bark of a tree.  But I did see some trees whose bark looked like a likely home for a butterfly.   I also saw some downy woodpeckers flying around in the understory where I also spied some telltale holes on the trees that seemed to indicate that even though I was not having much luck spying the insects that the birds were doing much better.

Not every insect species found in Ohio, however, will go unscathed this winter.  We can only hope that some of the invasives will find our cold temperatures unbearable. Specifically, I am thinking of the brown marmorated stink bug, a tiny, shield-shaped insect first detected in Ohio in 2007 that has since made a home here.  It exudes a pungent aroma when smashed that some compare to coriander, others to dirty socks. It also likes to invade our homes and has made itself quite unwelcome at mine.

Though I did not see any flashy colored flowers, or observe any intriguing examples of bird or mammal behavior, I did in fact have one of my most enjoyable walks through the park.  Looking for the smallest inhabitants of the wetland forced me to stop and observe, to look closely, to make my hike about the journey and not the destination.    So, I hope that you will enjoy a walk through the Eyring Wetlands Metropark to view the fall color, to listen for the calls of the gathering waterfowl and to maybe catch a glimpse of some busy mammals making their preparations for winter.  But give yourself a treat and don’t forget to look for those amazing insects making their winter home in the wetlands.