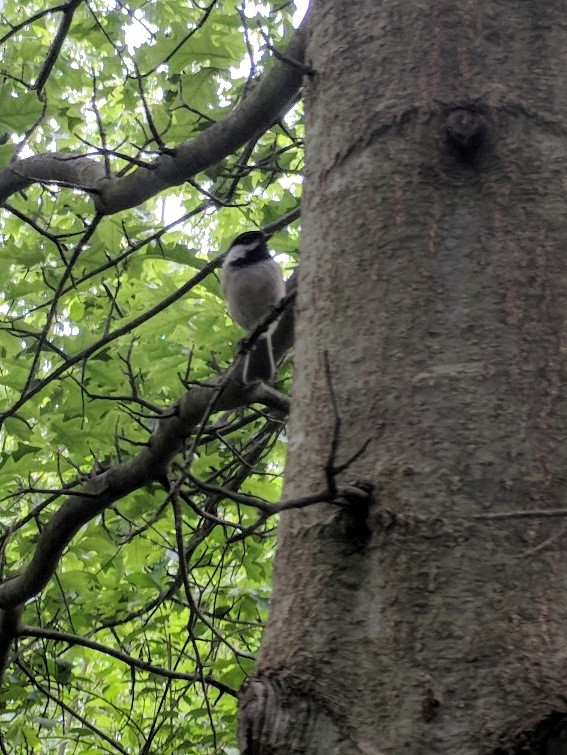 The sounds of spring were abundant during my visit to Eyring Wetland this week.  Starting with the sounds of the Ashtabula County highway department.  The County has a portion of Mechanicsville Road closed as it works on a culvert at the intersection of Mechanicsville Road and South River Road just south of the park entrance.  For the next few weeks, until June 14, access to this Ashtabula County Metropark can only be made from the north on Mechanicsville Road.  But this is only a portion of the construction noise that can be heard at Eyring.  Brett Bellas, ACMP Operations Manager, has been busy supervising the construction of boardwalks over some wet areas, mowing of paths and other grass areas, trimming of overhanging branches and repair of bank erosion and holes caused by muskrats.  All of this is typical maintenance work that is continually performed by Brett, his seasonal helper Austyn Hamper and a group of dedicated volunteers referred to as the “Over the Hill Gang”.  All of this work gets the park ready for some busy hiking months ahead. But don’t forget to wear your boots, it is a wetland park after all.

But the occasional sound of construction is not the only noise to be heard in the Eyring Wetland Metropark at this time of year.  The birds are busy and filling the air with their calls.  I am not an expert on bird identification, but I was able to pick of the distinct trill of the Red-winged Blackbird which the Audubon web site describes as a musical o-ka-leeee!  I also heard the calls of Canada Geese before I was lucky enough to spy a group of about 8 birds gracefully gliding across the main wetland pond.  Among the trees, I spied a Black-capped Chickadee who serenaded me with its signature chick-a-dee-dee-dee.

But the most intriguing and pervasive sound out at Eyring at this time of year is the sound of the American Bullfrog.  This true frog is amphibious and lives in freshwater ponds, lakes, and marshes. The Bullfrog has an olive green back and sides blotched with brownish markings and a whitish belly spotted with yellow or grey. The upper lip is often bright green and males have yellow throats. Bullfrogs like the warm weather that has finally come our way so there was an abundance of sound as soon as I stepped onto the path.  The male bullfrog’s advertisement call is deep and loud. Jug-o-rum or rumm…rumm…rumm, it calls. Some people think it sounds like a cow mooing, which is why the frog has “bull” in its name. Walking between the ponds at Eyring Wetlands, you might hear a whole chorus of these calls as male bullfrogs let other bullfrogs know the boundary for their territory.  A frightened individual, especially a juvenile, may give out a loud eeek! when it leaps into the water.  I was a witness to this behavior as one after another frogs jumped into the water as I approached.

Bullfrogs eat all kinds of insects, mice, snakes, fish, and other small creatures. They hunt at night, waiting patiently until they see something pass by that they figure would make a good meal. Then, with a powerful leap, they lunge at their prey with their mouths wide open and down the gullet their unlucky prey goes.

So as usual the sights and sounds of the park did not fail to delight.  It is always a pleasure to take the time to enjoy what nature has to offer and to experience what Ashtabula County Metroparks has to offer.