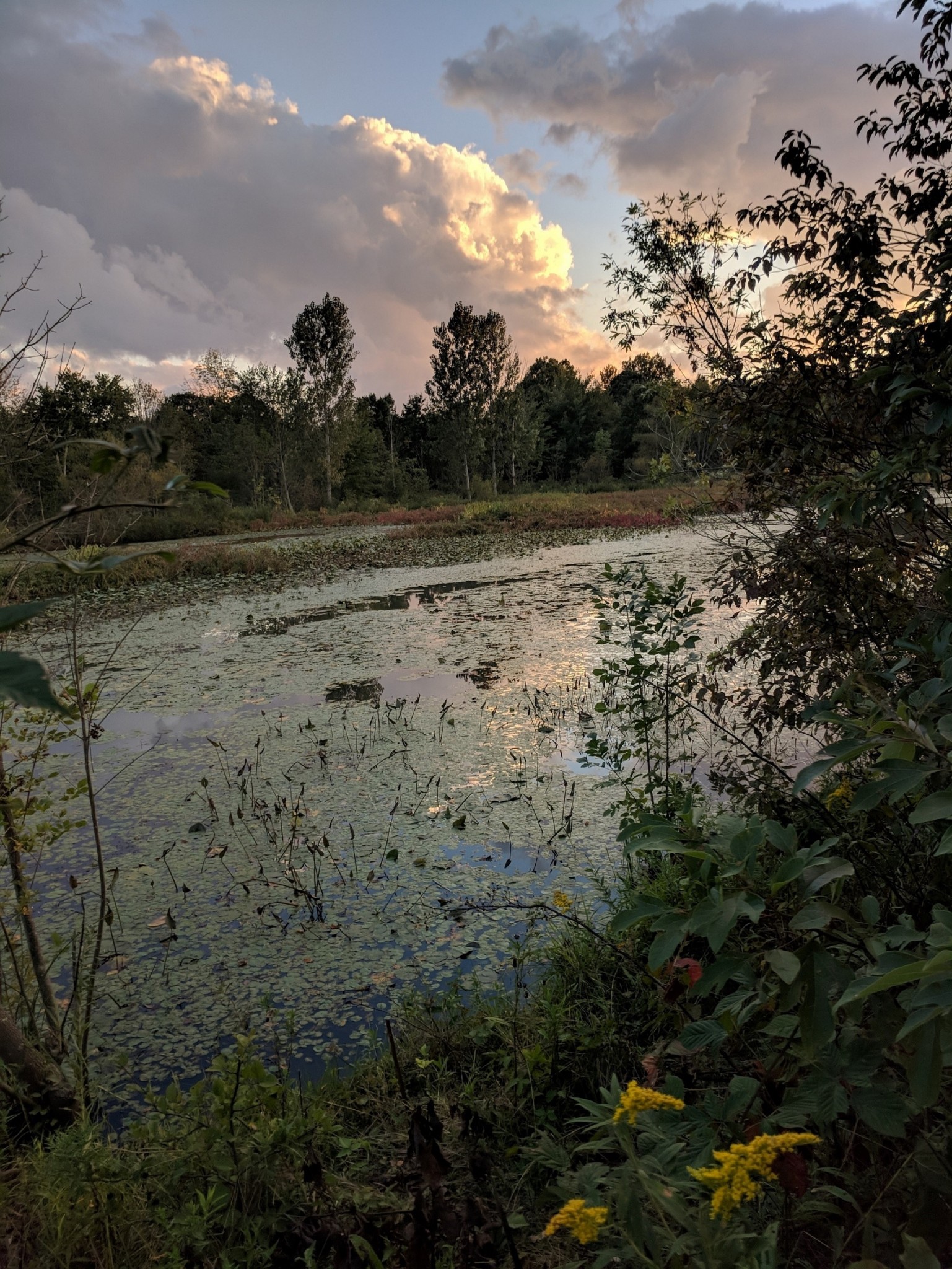 Fall has arrived in Ashtabula County with the sporadic cooling of temperatures and some heavy rains.  A visit to the Eyring Wetlands Park this week began with moving a large branch from the parking lot entrance.  The heavy rains soaked the tree canopies and probably helped bring down an already rotted branch from a silver maple lining the drive.  Clean up of this kind of debris is an ongoing job for the volunteers and staff of the Ashtabula County Metroparks.

The silver maples (Acer saccharinum) at this park entrance are probably remnants of the residence that once stood on this site. It is one of the fastest growing deciduous trees of the eastern and mid-western forest and is often found in the riparian forest where it can receive adequate moisture and plenty of sun.  Because of the advantage of its fast growth rate in the past it was planted heavily in residential yards and along suburban streets.  Its disadvantage is the brittle nature of its wood as evidenced by the fallen branch.  For this reason, it has fallen out of favor as an ornamentally planted tree.  But its characteristics still make it a great naturalizing tree when placed on well-drained river bottom soils along with a similar maple species the red maple, Acer rubrum.  The abundant seeds of silver maples are eaten by many birds, including evening grosbeaks, finches, wild turkeys, ducks and other game birds, and small mammals, especially squirrels and chipmunks. The buds are an important food for squirrels in late winter and early spring. The bark is a food source for beavers and deer and rabbits browse the foliage. Silver maple tends to develop cavities that are used by cavity-nesting birds and mammals and provide shelter and breeding habitat for many other species, including raccoons, opossums, squirrels, owls, woodpeckers, and other birds. It also seems to be a preferred nesting site for the Baltimore Oriole.

The approach of fall is heralded by an explosion of late blooming wildflowers.  The wildflower most obvious walking around the Eyring wetlands park this month is Goldenrod (Solidago). Goldenrod is a perennial plant that reproduces through its roots, bulbs, stems and by its seed.  It has a bright gold terminal cluster of flowers that are loved by the bees, butterflies and other pollinators. The various species are not easily identified by this lay person.  So, I am content to enjoy the color and sway of the tall spikes. Goldenrod does not cause seasonal allergies as many tend to believe.

You can also observe the remains of late summer wildflowers such as the purple of Ironweed (Vernonia), and a few peeks of orange of Jewelweed (Impatiens).  Scattered lower among the goldenrod are the whites and purples of the asters.  The red berry heads of the smooth or scarlet sumac (Rhus glabra) are also widespread throughout the park.  The sumac leaves and the leaves of the blackgum tree (Nyssa sylvatica) are beginning to show hints of red fall color.

I visited the park late in the day, so I was not able to catch the bees, butterflies and other insects dancing around the flowers.  But they have been very busy in my yard recently, so I expect that a daytime visit to Eyring would provide quite an insect show.

Animals use the seasonal freshwater wetlands for hunting. In particular, red-tailed hawks, great blue herons, and Northern harriers hunt for mice and voles. Vegetation around the edges of the wetlands including wool grass (Scirpus), rushes (Carex), and a mix of pasture grasses, provide year-round shelter for sparrows, towhees, and juncos.  I heard several birds calling and flashes of wings in the underbrush, but could not identify the birds.  I saw several birds fly to an island in one of the wetlands and perch on the trees. I startled a lone waterfowl from the water and observed trails in the floating vegetation on the water surface that indicated either waterfowl or a swimming mammal had passed that way recently.

The sun was going down and painting the sky a beautiful pink against the clouds as I walked back to my car.  Just as I stepped out into the opening around the parking lot, two deer leapt up in front of me making a made dash for the shelter of the underbrush.  I am sure that I had disturbed them from an evening meal of the short grasses that surround the parking lot and that they were not happy with my intrusion.  But I was happy to catch a glimpse of that flash of white tail as they made their escape. That moment makes me look forward to my next wetland wanderings.